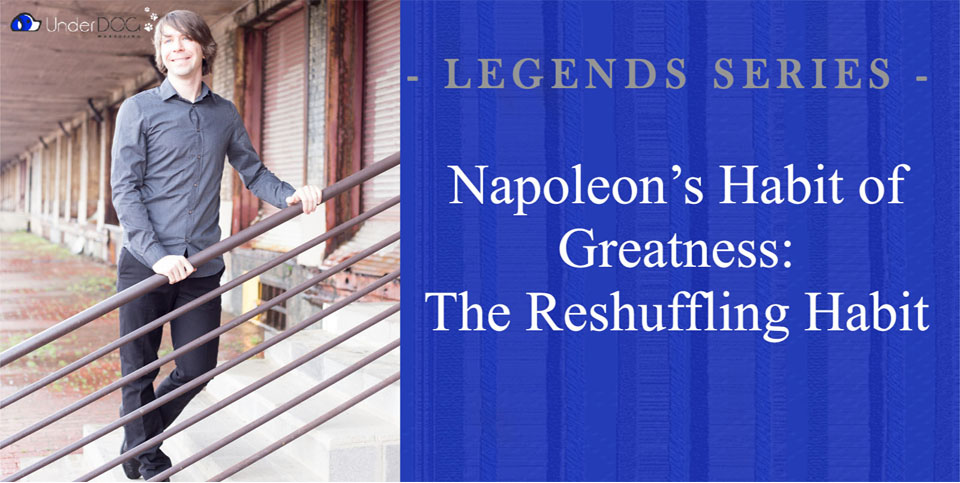 In my last blog post I discussed the habits Henry Ford developed to achieve the incredible success he did.

Henry Ford was a brilliant engineer, who spent 14 years of his life perfecting his Ford automobile before launching the business that led to his success. This technical genius he cultivated in turn gave way to the massive success he achieved in his life.

Napoleon Bonaparte was wired entirely different than Ford. Ford, with his automobile engine, perfected his craft for over a decade before launching out.

Ford was the meticulous engineer whereas Napoleon was the audacious military commander. Let’s look at Napoleon’s life and consider the personal greatness developed by this master of war.

The Reshuffling Habit: Change Your Environment to Maximize Opportunity

In studying men who achieved great feats, there’s one habit that many of them share. I call it the reshuffling habit.

People who reach for greatness understand that genius apart from external opportunity means failure. Great men don’t pop out of the womb with a single path into their destiny. Rather it’s an exploratory trial and error.

The Reshuffling Habit: This habit is the practice of repeatedly asking the question: Does this environment allow me to massively succeed? As you ask this question, you look for different paths that better align your own internal greatness (personality, skillset, habits, resources…etc.) with the best opportunity around you. Then once you determine a better path, you have to be willing to reshuffle your deck. Meaning you have to be willing to make the big changes required to put you onto the best path.

Any path of success you walk will have local peaks and plateaus. These are places where the path you followed reach a peak, and you have to climb down before you can climb up to the next higher peak. Most people are happy to settle and camp out on their favorite plateau.

The Reshuffling Habit is an important habit of greatness, and is often neglected in self improvement literature. It doesn’t matter how good your habits are unless you’re working in an environment that allows an individual to achieve hyper-success, and that aligns that opportunity to your unique fingerprint.

Napoleon was a master at reshuffling his deck.

Napoleon began his career by cultivating his personal brand of internal greatness.

Personal Greatness is the set of habits, resources, connections, and experiences that you can personally develop to set yourself up for greatness.

The demigods of our society may live on the peaks of Olympus, but for us mere mortals it’s important to understand that the accumulation of internal greatness leads to externa; greatness. We must have something we can focus on and develop based on our own actions and personality. That’s what personal greatness is. It’s the part of the equation that’s fully in our control.

Napoleon’s unique brand of personal greatness consisted of learning military strategy and tactics in his school years. Unlike the normal student, he lived and breathed the tactics of great battles of the past. He developed an understanding of the innovative military tactics that great strategic thinkers of his time were suggesting.

Then brought these unique ideas into a framework of war strategy.

As a student, he studied, drew out war simulations, and crawled maps late at night on the floor of his bedroom. He would often shirk the social expectations of men in his similar position in favor of intense learning. Later, he combined this specialized knowledge of war with key relationships in the government to leverage himself into positions of military command.

Napoleon repeatedly dared to buck the French command structure and reshuffle his deck when he saw opportunities for advancement. There would have been no Napoleon known to history if he had not seized the passing moments of history to propel himself forward.

Napoleon initially looked for opportunities to partner with revolutionaries and entertained ideas of freeing his home state of Corsica. He left positions in the French army and took numerous leaves of absence to develop extensive contacts in Corsica. Then he pursued higher ranks in the Corsican Volunteer Army all while still an officer in the larger French army albeit on military leave. After three furloughs he became Lieutenant Colonel, 2nd Battalion, of the Corsican Volunteers. His political maneuvering led to him effectively change environments away from the structured French army and into the fluid Corsican volunteer army.

The Corsican offensive ended in disaster and created a rift between Napoleon and his political ally in Corsica.

Napoleon used this failure to his advantage. He leveraged his political network developed over years of quietly connecting with revolutionaries to gain a command of the artillery besieging the important city of Toulon. This was a key battle that Napoleon used to expertly position himself for rapid promotion.

Napoleon succeeded in his command because of the habits and tactics he learned in those late nights of crawling maps and studying past wars. He was quickly promoted from Captain to Brigadier General in 3 months. That translates to 5 promotions in 3 months.

This would be like moving from a 2nd level manager (captain) to a top executive in a large public company in 3 months.. This rapid promotion happened due to him positioning himself in the right battle and having a store of internal greatness in tactics and military strategy. He applied the right specialized knowledge to the right environment which launched his career into the stratosphere..

Napoleon’s meteoric rise can be read as a man excelling at his positions and continually reshuffling and changing environments to climb the chaotic ladder of political success in a time of revolution. Corsica led to Toulon led to commanding a campaign in Egypt and national recognition. National recognition and his successful army led to the position of influence which he reshuffled into his crown.

The Final Reshuffle: Seizing the Moment to Become an Emperor

Napoleon’s success on the battle field ultimately set him up to reshuffle again by disobeying the orders of his government superiors. For good reason, they were afraid of having a popular military leader in the capital city during a time of revolution.

He went to France in secret because he recognized that this was a moment in history that would sculpt his nation. At this chaotic moment of uncertainty he outmaneuvered the other politicians with his attention to detail and incredible levels of hustle to become the leader of his nation.

Each mountain climb ends in a peak. These local peaks require you to climb down to climb up again.

That’s when the burning spark of internal greatness draws you back to that haunting question:

Did this article spark something inside of you?

Catch the spark, then tuck it carefully away. Take that insight to a quiet place let it catch fire. I do this through journaling and prayer. Then I take my most important ideas and translate them into scripts to read each morning (autosuggestion).

Light a new dream aflame and make a change in your life!

Did you enjoy this article?

Author: Joseph Drups
Hi! I’m Joseph, the founder of underdoglife.net. I’m a passionate entrepreneur who loves to write about start-ups, passive income, and achieving your purpose. I work on projects that I find purpose in with people who I believe in then tell you all about it on my blog. Take a few minutes and drop me a message. I’d love to chat!

Want to read more? Join my email list to receive notifications when I publish my next article.

The 5 Most Important
Questions in E-Marketing

#2: Is your business invisible online?

#3: How can you stop one bad customer review from crippling you?

#4: The single MOST important factor in ranking in Google is…

#5: Has Technology left you behind?