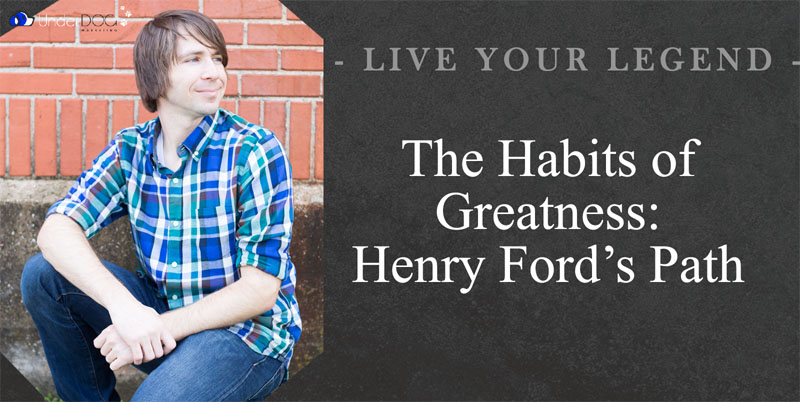 Are you living your legend?

I love studying great men and women with the goal of trying to understand what they did to achieve their success. I trace back their line of habits, actions and developed resources to understand the seeds of greatness.

This is what I call internal greatness. In this article, I walk you through insights gained from the life of Henry Ford while discussing the seed of internal greatness that led them to incredible accomplishments.

This article is the first of my Legends of Self Improvement series where I share the lessons found from studying legends of personal achievement. I hope to inspire you to chase your dreams and develop your own internal greatness.

Henry Ford began his journey into internal greatness by fixing machines. He had the mind of an engineer and exhibited it by fixing mechanical watches in his teens.

As he matured, so did his knack for tinkering. As a 19-year-old, Henry Ford holed himself up in his parent’s barn where his machine shop consisted of everything he would need to tool a steam engine.

These long hours of tinkering developed a technical knowledge of engines that few other machinists of his time had. The initial inspiration that pushed the young Henry forward was the idea that the steam engine could revolutionize the monotony of farm work. He had a passion for applying technology to the working man.

The dream burned inside Ford, and he continued to feed it for 14 years until the dream became a working gas engine. I like to picture the scene as a Rocky montage with Eye of the Tiger playing in the background and Henry Ford working year after on his secret obsession.

In these early years, Henry Ford laid the foundation of his own internal greatness. This business titan lived his legend in the quiet hours of his hidden workshop. During this time, he hand machined the best automobile engine the world had ever known.

Ford’s training regiment and destination was unique to his personality and talents.

They lived their legend.

Are You Living Your Legend?

This question is worth wrestling with. Without engaging important questions, I skim along the surface of my life, avoiding the deeper soul searching that brings feats of accomplishments.

This blog post centers on the idea of internal greatness.

Before there is greatness, a person must develop internal greatness.

Internal greatness is what we mere mortals can cultivate as we stare up our mountain of Olympus. By focusing on the cultivation of internal greatness, it avoids the trap of seeing greatness as something that happens to us rather than the result of a long journey into your legend.

Into The Unknown: Beginning The Journey to Greatness

The beginning of my journey felt like setting a course to an unknown destination. I left the stable income of a government job to launch my business. I worked for years building up a knowledge of operations, marketing, business and websites. However, launching a business is different from keeping up with a side-hobby while working a normal job.

It’s much harder. I started by going door to door and cold calling business selling consulting packages for small businesses. I had plenty of experience, but working for other people, reading books and “safe” practice can’t prepare you for the raw survival instinct that kicks into gear when you’re actually doing it.

That first step feels like falling off a cliff while trying to knit a parachute.

I imagine this was how Henry Ford felt after leaving his machinist job at Thomas Edison’s machine shop, for the uncertain prospect of launching his first automobile company. He spent many years in preparation tinkering in his own workshop. Then came the moment of launching into the unknown dark waters of an uncertain future.

His path took him forward one small step at a time until his plunge into entrepreneurship. This was when, after perfecting his knowledge of automobile engines, he launched a venture with two business partners who wanted to make high end sports cars.

Refine Your Legend with Your Internal Compass

After the plunge comes a period of refining and relaunching your dreams based on your personal compass. Oftentimes, this happens through trial and error.

Dream, build, try, succeed partly or fail, then repeat until you succeed fully.

This process requires you repeatedly try new things and reshuffle the deck if your environment doesn’t harmonize with your talents, ambition and unique brand of internal greatness.

I constantly adjusted my course by staying true to my internal compass. I began in website development, moved into marketing consulting and naturally flowed into management consulting. From there I reshuffled my deck and started buying websites and other businesses.

Eventually, I found a place where my talents, skills and connections gained a foothold to push me into greater success in buying, operating and merging small businesses.

Ford followed a different path. After launching his initial venture, he found his goals didn’t line up with his business partners’. Henry Ford’s dream at this point had evolved from engine design and farm work to creating a car for the common man.

In opposition to his dream, his partners wanted to make high end luxury cars and racing cars. At this point there was no market for the common man buying automobiles.

Ford’s internal compass was pointing in a different direction, so he reshuffled his deck and left the company he co-founded. This is something we see over and over again in people who achieve incredible success. You can view this especially clearly in the life of Napoleon Bonaparte, who I’ll discuss in next month’s article.

Ford, however, had a truly brilliant dream that aligned his internal compass.

This dream was refined and solidified by fifteen years of consistently working toward it. His internal compass led him to launch a new business which lined up his internal greatness with the massive external opportunity of mass manufacturing an automobile.

Ford’s dream was to build a car for the common man, and he couldn’t do that in partnership with people who didn’t want the same.

After leaving his first automobile venture, he restarted with Ford Motor Company which became the business we know today. Henry Ford eventually created the first car for the common man using pioneering business processes like the manufacturing line.

It was the collection of personal habits, resources of connections, money and specialized knowledge that Henry Ford spend a decade and a half cultivating.

Henry Ford took the dream as his north star and lined up opportunities with his cultivated greatness. He reduced the number of parts to manufacture and created the assembly of line to reduce costs. Together, his systematic approach to business brought the price of a car from a novelty for the wealth to within the working man’s reach.

He lived his legend.

Author: Joseph Drups
Hi! I’m Joseph, the founder of underdoglife.net. I’m a passionate entrepreneur who loves to write about start-ups, passive income, and achieving your purpose. I work on projects that I find purpose in with people who I believe in then tell you all about it on my blog. Take a few minutes and drop me a message. I’d love to chat!

Want to read more? Join my email list to receive notifications when I publish my next blog post.

The 5 Most Important
Questions in E-Marketing

#2: Is your business invisible online?

#3: How can you stop one bad customer review from crippling you?

#4: The single MOST important factor in ranking in Google is…

#5: Has Technology left you behind?